One complaint we often keep hearing on ‘masala’ films is that how different the first half and second half of the film are. But Saaho wasn’t supposed to be just another ‘masala’ movie. It should have pushed the boundaries for them,should have been the larger-than-life action extravaganza that it tries to be. To my utter dismay, it ends up being somewhat better than usual masala films, which is clearly not what it wants to be. It is a grand 24-course meal that has little to no taste. Coming back to the ‘halves’ issue, each half of Saaho feels like a different film. Digging deep, the first half alone feels like an Anthology film with two parallel stories. One set in the fictional Waaji city(Somewhere in the middle east, I guessed it, there is a desert) where every character, including the actors in the background, wear designer suits. And other, in stylishly designed interiors set in Mumbai.

I refrain from using this, but Saaho is, style over substance.

The good thing, Saaho is ambitious. The bad thing, it is too ambitious that it dwells into the zone of absolute silliness at countless instances. There is an Ostrich in a Mumbai gully. A Black Panther in a residence in the same gully. Overdoing anything is not a very healthy choice. And that’s the choice that has brought Saaho south.

The writing is all over the place, it tries to be a grand affair, but it’s just too many calories to digest. Without wasting a second, we are given a voice-over that introduces us to ROY Group whose ruler has died and it’s a fight for the power which we have seen a zillion times. Ok, I get it. But what does ROY Group do? Are they an IT firm? Are they automobile manufacturers? If they are doing business, why are they portrayed just as pure evil? I get it, they are *ugh* international mafia.

Ashok(Prabhas, still in Bahubali mode) is introduced, and the stage is set for a huge-mandatory-intro-fight. There is a staircase fight, a corridor fight, a pehelwan fight, a butcher fight, and a face-off with the Panther, which is a resident(I guess). It might have been fun had these action pieces been spread uniformly or as per the situation’s demand throughout the first half. But, it all happens in the mandatory-hero-intro fight! Then, we are introduced to Amrita Nair(Shraddha Kapoor in the damsel in distress mode). Then began the movie(or I felt so), it travels in a zone of mystery/manhunt/cat & mouse game. But the mood doesn’t feel like any of these. It’s plain, uninspiring and lazy for the most part of the first half. Ashok is pretty inconsistent, just like the film. He does comedy, is chilled out, but suddenly shows off his intelligence — all of this amidst of the slow-mo walks and looks. A sidekick in a masala film is mandatory. All the sidekick has to do is, stand beside the protagonist, sound dumb and get slapped by the hero in almost every scene he is in. ‘Vennala’ Kishore serves this purpose as Goswami. One thing that’s fresh about Saaho is, that every time Ashok slaps Goswami, we cut to a bottle breaking. New ways of storytelling! As the film keeps moving at a sluggish and inconsistent pace, we keep smelling something. Something is going to happen. And it does. There is a fairly enjoyable twist that sets the mood for the second half. I was still waiting for the movie to begin, after sitting through 80 minutes of it.

But again, the film sticks to beating around the bush. 2 futile songs and 45 minutes later in the second half, the action begins. And boy! It is fun. Sadly, it is too late and leaves you exhausted by the time the fun begins. The last 30 minutes of the film might be one of the best sequences. But sadly, they serve no purpose and add no value. Pretty much like the Batman and Superman fight, which could have been solved over a discussion. Also, it doesn’t hit hard or keep you on the edge because the stakes are not high. Or should I say, no stakes? Or I didn’t get what were the stakes, in first place!?

The only time I felt completely invested in the film were the last 15 minutes, when the film actually gets to some story, and the film ends after that. But the twists are generic, and you see them coming from a mile. The purpose is lost the moment you smell it.

Writer and Director Sujeeth’s previous film, ‘Run Raja Run’, had a fresh flair in its writing. The smartness is visible here too in the opening sequences which are smart and fun, but they are short-lived. There are glimpses of what Saaho is trying to be. They are just glimpses though. An example is a scene where Ashok and Amrita meet for the first time, with soothing and romantic music playing in the background. The smartness has somewhere vanished between the script and the screen.

The worst aspect of Saaho is the way the characters are written, with a dozen characters in it, not a single character is fleshed out. These characters, whose names I don’t remember, have significant screentime. Yet, they make absolutely no impact on the proceedings. The antagonist is the emblamatic villain. What’s his deal? He is evil. What does he do? Doesn’t matter; he is evil. There is a scene in which one of the guards is simply shot and killed because he laughed  at the villain as he is discussing a plan. These people are stupids. Just brainless, dumb, idiotic, foolish, irrelevant, laughable, ludicrous and senseless. These characters, I mean.

The Waaji city, which is built up as a deadly place, is never fully explored barring the glossy interior sets. The score sounds more of electronic noise that fills up the auditorium than music that is trying to enhance the scene’s emotion. For a moment, I wondered why the movie is this complicated, only with the proceedings, I realised it’s not the complexity, but the hazy narration that’s bothering. The issue here is not the physics or gravity dynamics; it’s outright silly.

Despite all the shortcomings, Saaho is not a terrible film; it kept me engaged with something happening on screen once in 10 minutes. The silliness in the writing and conceiving brings it down under the weight of its own ambition.

Let me say this, there are verbal PUBG references in the movie. Also, one can find UMP 9, M416, and M249, the only gun that manages to hit the protagonist with 1 bullet. Rest of the arsenal is merely for display. With volumes of ammo going in vain, the wastage of resources angers me because I know the pain of collecting ammo in Erangel. Mandira Bedi(with a dismissal performance wearing awful costumes) shoots trained professionals at point blank range with UZI.

As mentioned, Saaho keeps you gripped for 15 minutes. With a runtime of 171 minutes, that’s less than 10%.

One thought on “Review: SAAHO – Aimlessly Slings Between Ambition And Silliness” 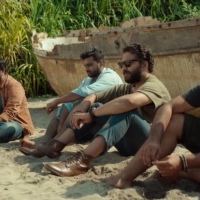