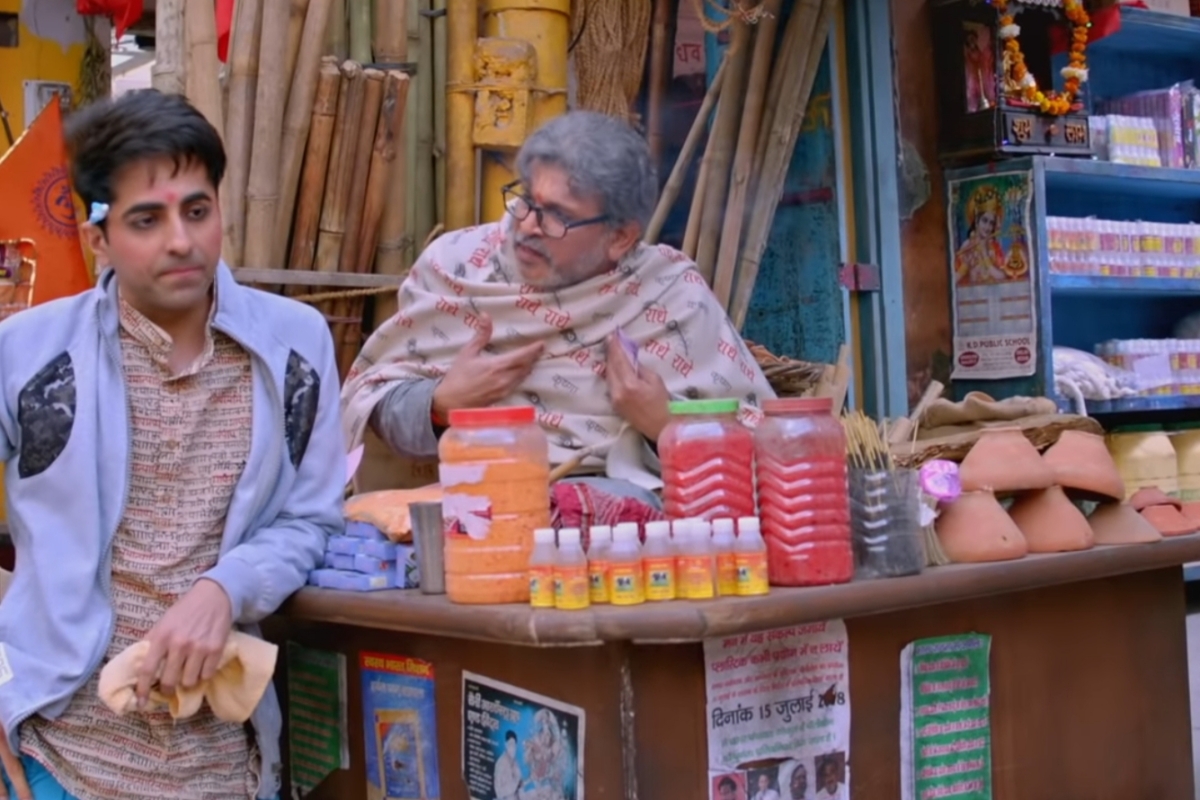 When one watches a film, there are two possible reactions-

Both of these inspire you to write. Betwixt, some films generate a reaction that doesn’t fall in either of the said categories. Raaj Shandilyaa’s ‘Dream Girl’ is one such. It is not good enough to be praised or bad enough to be thrashed. I wouldn’t call this a piece of criticism. It is more of an opinion piece. No doubt, I had moderate levels of fun with it. I laughed hard a few times. But that is it. Nothing more, and even the film doesn’t try to be more. Now, it is your perspective. If a couple of good laughs is all you are looking for, Dream Girl will work for you.

Karam(Ayushmann Khurana rehashing his own characters from ‘Shub Mangal Saavdhan’, ‘Bareily ki Barfi’, ‘Vicky Donor’, and every movie of his in which he played the boy-next-door), has passed off his whole life as a girl, thanks to his ability to make female voice. He plays Sita in Ram-Leela and Draupadi in Mahabharata. This is the one-line intro we get that is spread over roughly 3 scenes.

Desperate for a job despite completing BA, MA, and MPhil, Karam lands a job in 5 minutes after cementing himself as Puja, with his voice, in a so-called Call Center. All he has to do is talk with horny men who call and keep them engaged with the nasty talk as long as possible. This is ugh sex talk, you may call. But considering the family audience Ayushman’s stardom pulls, it is merely reduced to talk. In short, horniness is translated into loneliness. This changes the whole movie, sadly. One thing Anand L. Rai did was to bring back mojo to the small town stories where things are not larger-than-life. This gave some memorable films like ‘Bareilly…’, ‘Shub Mangal…’, ‘Stree’, etc. It just felt, ‘Dream Girl’ relies on this small town template only for the sake of it with its small-town setting.

So, Puja gets the ball rolling and starts connecting with many people out of whom the story focuses on five people. What happens when these five start loving Puja? Just imagine how fun it is going to be! Good news- it is fun. Bad news – it’s got nothing else. There are high doses of comedy being served from time to time. For every 5 minutes, there is a hilarious scene, but in between these moments, it is stale. It almost feels like you’ve earned a great moment after sitting through many lame ones. And all of these moments work because of the great dialogues. The issue, however, is the treatment that started to feel monotonous from Ayushmanm Khurana.

What is the business model of this call centre? Karam’s boss says he needs to keep the customer engaged on a call. The more time the customer spends talking, the more money his company is gonna make. Is the film set in Pre-Jio era. There was no Apple Watch 3 back then, but Karam wears one. Are calling rates even a thing in 2019? Someone, please tell me how is that working? I would love to know it for a friend who is looking for startup ideas.

Also, Nushrat Bahrucha’s Mahi is nowhere close to a real-life woman. It’s almost like she roams around with a board hanging around her neck that says, ‘READY TO GET MARRIED, ALL YOU HAVE TO DO IS SOME SWEET TALK AND A PLAY MERE RASHKE QAMAR’S RIP OFF IN THE BACKGROUND, BY THE END OF SONG, WE WILL BE ENGAGED’ Because there is no other way her character fits in here. Maybe she is set in to bring in the conflict when Karam’s identify crisis kick-off, but no! The problems, which are supposed to be the core, are resolved in a few minutes. The conflict which the film keeps building throughout is resolved rather too quickly. Everything in Dream Girl is light-hearted, nothing is designed to hit hard or to say the least, create an impact of the least proportion. Even the aftermath of a youngster’s suicide attempt is reduced to a comedy sequence. That is my biggest issue with Dream Girl, it takes itself too lightly. It’s not a bad thing. That felt plain because, after a point, I knew that none of the character choices or turns wouldn’t make an impact on the story.

Vijay Raaz and Annu Kapoor are a delight to watch. They fill the screen with life every time they appear on the screen. Vijay Raaz, as a police constable fed up with his life, who writes Shayari, is hilarious. With an ever agitated look on his face and a voice that feels he has no interest in talking to others, he shows how comedy is done. And the excitement in his voice when he talks to Puja is clearly visible, err, audible, proving how a great actor can bring in layers to a character that could have become a caricature had the role been miscast. Same goes with Annu Kapoor, whose voice I’m a massive fan of(Search and listen to Suhana Safar). The man brings the roof down with his antics. And writers Raaj Shandilyaa and Nirman D. Singh deserve an applause for the way they have written his character. While the character is more of a caring, funny father in the first half of the film, it is he who creates the most engagement factor in the second half.

Other characters such as Nidhi Bhisht’s Roma, Abhishek Banerjee’s Mahidhar, Raj Bhansali’s Toto are terribly underwritten. Rajesh Sharma, who plays WJI, the owner of the call centre where Karam is employed, also has a board hanging around his neck that says, ‘DON’T TRUST ME. I MADE A CAREER PLAYING NEGATIVE ROLES. ISN’T IT WRITTEN ON MY FACE?’ Sadly, Karam doesn’t see it. There is a brilliant scene in the pre-climax where all the hell breaks loose and people who love Puja gather, and there is a lot of chaos, it is very entertaining. And the movie needed more such sequences. But it relies too much on dialogues which get repetitive after a point.

And the ending feels very convoluted, staged, and abrupt. After a glimpse of what could have been a brilliant confusion scene, a song breaks out of nowhere and ends with Karam giving a speech about how we need to connect with people in real life than choosing virtual relationships. What he says is right, but, ‘SHOW. DON’T TELL.’

While the film is not a dwindle of a funny premise, it could have done a lot more with it. Dream Girl is a well-intentioned, light-hearted movie that has some perfect moments but the unmemorable ones weigh it down.

Again, I’m glad Ayushmann Khurana doesn’t have the urge to make larger-than-life films. But what concerns me more is the line-up of films he has got. Bala, dealing with premature baldness. Sequel to Shub Mangal Saavdhan, touted to be India’s first gay love story. Gulaabon Sitaabon, another film set in a small town. All of them are smaller-than-life films set in small towns. I really hope these films go beyond the Brand Ayushmann and their small-town setting