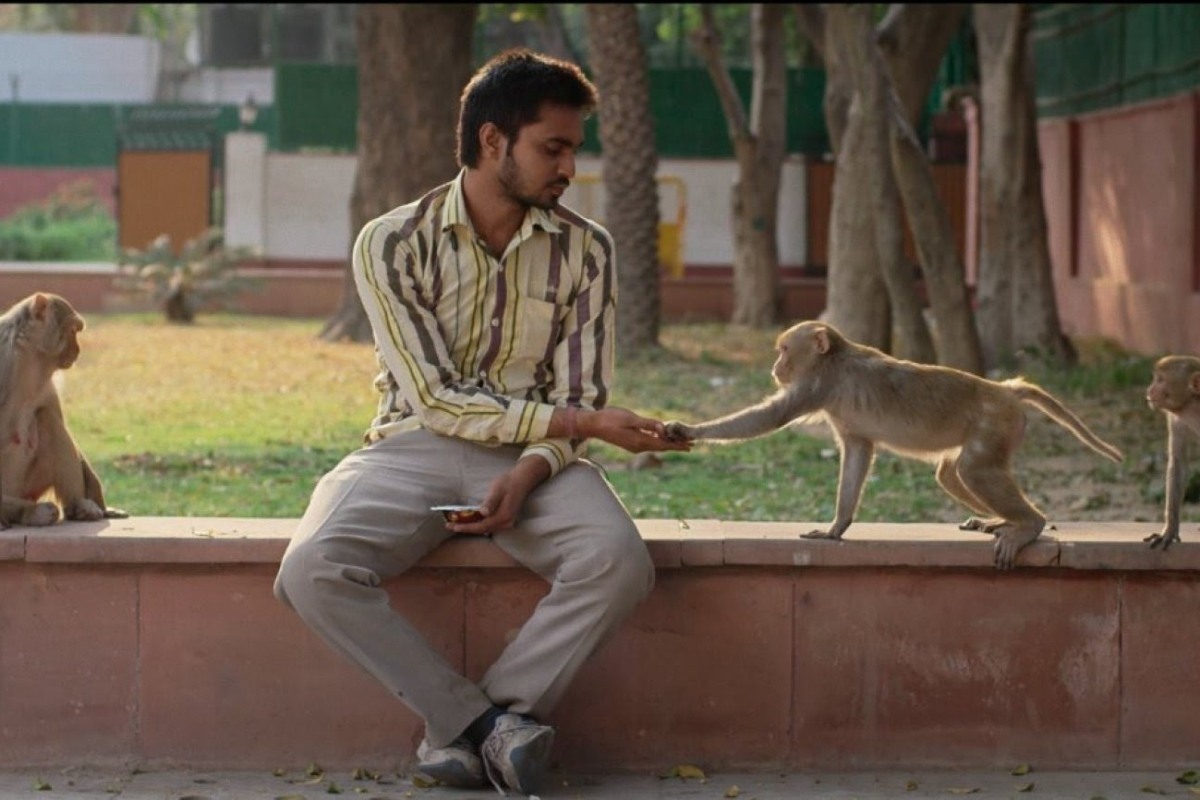 If there is one word that sums up Prateek Vats’s Eeb Allay Ooo!, it’s sonder. Sonder stands for ‘the realization that each and everyone we come across every day has a life as complex and vivid as yours’. Others’ lives don’t matter to us, right? All that bothers isbyour own life. It is not wrong. We are humans. But taking others for granted as if their emotions worth a cent, now that is not right. This is what writer Shubham conveys through his layered writing that raises countless questions about the functioning of the system, society, the way people are treated and in general about how hard it is for a poor yet good person to live in our country. Had he been a jerk, he would have inclined towards crime, and maybe that might have made it easy for him. However, it would have become a completely different film.

If you are clueless, what Eeb Alley Ooo! means, we are told in the very opening scene that it is a sound to repel monkeys. Mahinder, a monkey-repeller in real life, plays himself and trains the noobie, Anjani, the protagonist (an exceptional Shardul Bharadwaj). Anjani lands in a contractual job to repel monkeys in Delhi, which is probably the most realistic version of Delhi, I’ve ever seen in a Hindi film. Also, it is pretty smart for the lead to be named ‘Anjani’, the mother of Hanuman. Just saying. Now, contrary to how silly and dismissive the concept sounds, monkey-repelling turns out to be serious business for Anjani, as he struggles to get the sound right, which makes his life hell. Parallelly, there is Shashi, Anjani’s brother in law, who is a security guard working in the night shift in an amusement park. Anjani’s pregnant sister packs food items to be delivered.

What writer Shubham does with these characters is, he puts them in circumstances, which appear modest for an audience, who can afford a samosa-coke combo for 300 rupees. But the characters are forlon, making a strong point about how hard it is for people below the poverty line. There are repetitive instances when these characters are looked down, degraded by the upper class both verbally and non verbally, backing up the already stronger points further.

Eeb Allay Ooo! has powerful social commentary about oppression. It is not slavery or untouchability but is more contemporary. All the 3 main characters are oppressed by people above them. Anjani is continuously insulted by his contractor. And the contractor gets the same treatment from a government official who is above him. Do you see the hierarchy? There is a scene in which a janitor in the amusement park Shashi works in, told in an extremely rude way by his employer. The doctor whom Anjani’s sister consults is very rude towards her and her family members as well. Even the person whom she has to deliver some packages is very disrespectful when she asks for 30 minutes of extra time citing the electricity cut in her house for the delay. All of them are directly oppressed, receive no respect from people above them. And I guess when I say people ‘above them’, I refer to the economic status. As Anjani struggles to repel the monkeys, it is brilliantly captured by Saumyananda Sahi, he comes up with a plan to dress up like a langur to scare them off. While Anjani comes under severe heat for doing it, he sees a langur doll with a pre-recorded ‘Eeeeb Alllllay Ooooooo!!!’ playing loop. The doll is attached to a gate of a villa to stop monkeys from entering inside. Isn’t it Anjani’s idea? Is the writer hinting at Capitalism?

This film is a great case-study to dwell into social and political commentary, not making it a social service lecture. With great performances and a fine mixture of both light & dark humour, this was a very effective movie watching experience. I thought maybe I should be more polite to uber drivers when they are late.