The protagonist of Shoojit Sircar’s October is Dan, a hotel management intern, who is described by his friends as ‘always irritated’. An emotionally distant Dan is, indeed, continually agitated, and shows little to no interest in others’ lives. When Shuili, Dan’s colleague, has a freak accident, he is quite intrigued when he learns that the last words Shuili spoke, seconds before the accident, were ‘Where is Dan?’. Then begins his quest to find why she asked about him. With Shuili slipping into coma, the doors are shut. We know that the question has no significance, they were, at most, a part of the casual talk. It’s not the same for Dan, though. We see that he is not finding the answer to this question, but he is finding himself. Yes, it is a sort of coming of age story that chronicles this boy’s transformation into a man. But not in the ways I expected to. The movie is primarily set in a star hotel, where Dan works and hospital, where Shuili is hospitalized. All we can do is hope that she gets well and patiently wait till then, which is very difficult for an irritable and impatient person, that Dan is. But contrasting to his regular friends, Dan is the only one who appears to be hugely swayed by this situation, or maybe he is only one who is human enough, I feel. Even when a friend of his asks him why is he highly affected, he replies to her, “how can you be unaffected?”

Is Dan ‘growing up’ or bringing out the real person in him?

When a person is in a coma, fighting for life, the emotional anguish their loved ones go through is indescribable. It’s the harshest challenge life can throw at one. That’s exactly what Shuili’s family goes through. I cannot imagine the agony of Shuili’s mother, Vidya Iyer. The single mother, who never gives up on her daughter’s life, is one of the strongest women characters I’ve seen in Cinema. Vidya is a professor, she works at a college, she also has a daughter who is immovable in hospital since months, Vidya can do nothing but face this situation and keep up with life. And she does. That is why she is a strong woman. Just by the subject of the film, one can take an easy guess about the tone of the film. It has the potential to drench the audience in melodrama, but it doesn’t, willfully. Writer Juhi Chaturvedi masterfully balances the sadness of this family and Dan’s character growth.

Proceeding to Dan’s character, his strife is internal, you never apprehend what’s going on this unpredictable guy’s mind. Dan is by no means an expressive person, but Varun Dhawan’s performance as Dan is free of all the physical acting and brilliantly conveys this internal transformation. Banita Sandhu’s Shuili has little ground to play in, but as Dan gets to know we get to know Shuili, just the image of her face is heart-breaking.

All said and done, it’s Geetanjali Rao’s Vidya Iyer, the helpless mother whose performance crushed my heart as I could feel her pain, this is what happens when a good performer gets proper material.

I remember choosing Ready Player One over October, last April. Ready Player One with all the spectacle, doesn’t occupy a byte in my memory currently. But October, which I saw more than a year ago on my 13-inch laptop screen, is frozen in mind, frame by frame. The image of Dan and Shuili in a wheelchair, sitting in a park, is my favourite shot in my film. The hope that Shuili is recovering, and Dan becoming a responsible man, both of these are evident in addition to being the most unconventional love story between two broken people, one literally and the other figuratively. I’ve seen the film only once, I want to watch it again, but I know I can’t. This is what happens when a film disturns you for the right reasons. 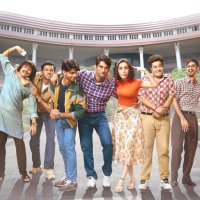